Guests of the iconic British fashion house, including Yasmin and Amber Le Bon, enjoyed Nyetimber at a backstage reception following the successful show at the Royal College of Surgeons, Lincoln’s Inn Fields. 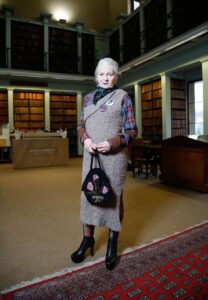 Nyetimber enjoys a warm relationship with Vivienne Westwood, keenly supporting fashion events and recently welcoming the designer and her team on a private tour of the Nyetimber Estate.