2017 has started off stylishly with Vivienne Westwood’s London Fashion Week Men’s show which took over the old Seymour Leisure Centre in West London on the 9th of January.

The Autumn/Winter 2017/18 show, tellingly named Ecotricity, focussed on climate change and gave a strong nod to Dame Vivienne’s environmental advocacy with an ethos of “‘Buy less, choose well, make it last’ to limit the exploitation of the planet’s natural resources.”

The show was something of a homecoming for the British fashion icon as the men’s collection is usually presented in Milan, Italy. 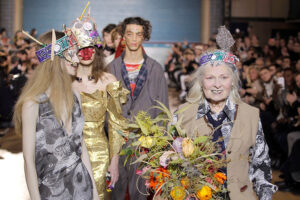 In true Vivienne Westwood style, there was an emphasis on unisex shapes, and a departure from tradition with a new women’s collection being unveiled alongside the men’s for the first time.

Models paced the catwalk in the collection’s ‘DIY-punk’ look before Dame Vivienne donned an ‘Ecotricity’ paper crown of her own, culminating the spectacle that was Vivienne Westwood AW17/18.

Post-show, we were honoured to serve Nyetimber to the team behind the collection, as well as Dame Vivienne, her VIPs and her stunning group of models, raising a toast to what proved to be yet another amazing show.

Our warmest congratulations to Dame Vivienne on her fabulous new collection.

To see photographs of the show at London Fashion Week, and to learn more about the inspiration behind Vivienne Westwood’s AW17/18 collection, please visit her website.