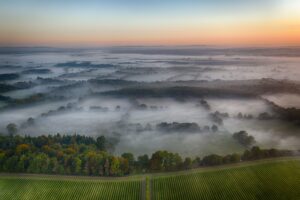 New social distancing measures have been introduced by the leading English Sparkling Wine producer Nyetimber to enable it to kick off what is expected to be a bumper harvest next week following good summer weather.

Over the next few weeks grapes will be harvested from 260 hectares (640 acres) of Nyetimber estate-owned vineyards in West Sussex, Hampshire and Kent.  This represents the largest area of harvested vines of any English Sparkling Wine producer.

Nyetimber and the English wine industry in general continues to be a UK success story despite the challenges faced by Covid as consumer demand shows no sign of slowing.  Total production increased from 5.9 million bottles in 2017 to 10.5 million bottles in 2019. In terms of sales, 5.5 million bottles were sold in 2019, an increase of 70% over the prior year – and international sales accounted for 10% of this. The total area under vine in the UK now stands at 3,579 hectares, up 83% since 2015.

Online sales of Nyetimber via the company’s website have increased significantly since lockdown as demand for at home consumption has increased and the ability to buy single bottles has appealed to consumers.

The highly skilled pickers will spend the next two weeks carefully progressing across the estate’s vineyards ensuring that each bunch of Chardonnay, Pinot Noir and Pinot Meunier grapes is perfectly ripe and of the highest quality, on which Nyetimber prides itself.

After each bunch of grapes is carefully picked, they will make their way into Nyetimber’s state-of-the-art pressing centre which incorporates gravity flow to ensure the highest quality of juice is extracted.

Cherie Spriggs, Head Winemaker at Nyetimber commented: “Having embraced the required social distancing measures we are looking forward to a bumper harvest as we have benefitted from good growing conditions this year, in particular the warm and dry summer weather which got us off to a great start. We expect 2020 to once again bear fruit of high quality for our wines.”

Nyetimber is regarded as the pre-eminent English Sparkling Wine brand and it has been a pioneer of the English wine movement winning multiple international awards. Nyetimber wines are seen as world class, and while its sales have grown significantly in recent years, the growth has not come at the expense of quality. Head Winemaker Cherie Spriggs was named ‘Sparkling Winemaker of the Year’ at the International Wine Challenge 2018 – one of the most highly-regarded wine competitions in the world. She was the first woman as well as the first person outside the Champagne region of France to win this prestigious award.

Nyetimber’s production volume is set to double to two million bottles a year by 2030 as it expands the size of its vineyard. In May 2020, Nyetimber planted 195,000 vines covering 42 hectares at a new site in Kent and it replanted 10,000 vines covering 2.5 hectares at the estate’s main vineyard in West Sussex.

HRH The Duchess of Cornwall has hailed the trend for English Sparkling Wine to be beating the French at their own game, saying: ‘Since becoming president of Wines of GB in 2012, I’ve witnessed our wines going from strength to strength, in quantity, and even more importantly in quality. Our winemakers have been winning international prizes, and I’m happy to say, beating our French friends on many occasions.’