(Thursday 8, May), Charles Metcalfe co-chairman of the IWC, yesterday announced the winners of the Best English Sparking wine with Nyetimber Classic Cuvee 2009 sweeping the board to victory. The Classic Cuvee 09 scooped the highest accolade possible for the Overall Best Sparkling Wine in the UK as well as collecting trophies for the Best English Sparkling White Wine and the Gold Medal award. The Classic Cuvee is now being entered into the International Wine Challenge Global Sparkling Wine final – also known as the “Oscars of the Wine Trade” where it will go up against the best Champagne and Sparkling Wines houses from around the world. The results will be released in July. 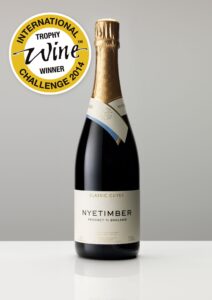 Charles Metcalfe, co-chairman of the IWC said: ”Each year our English winemakers are going from strength to strength, and these gold medal winners are fantastic. The conditions in England’s Southern counties are perfect for creating excellent sparkling wines, and drinkers are increasingly discovering that our local vineyards have plenty to offer.”

Cherie Spriggs, Nyetimber’s head winemaker, comments: “We are absolutely thrilled with these awards and it truly shows what an outstanding wine this really is. It is nice for Nyetimber to have this recognition, for the team and for me personally. It is incredible and it lets me know we are heading in the right direction. I wasn’t expecting it and I am very proud. The 2009 is the finest vintage to date of Classic Cuvee ever produced by the House.”

“2009 was an exceptional year both in terms of quality and quantity, but we also felt it was absolutely necessary to leave this wine in our cellars for more than three years so that the wine could gain added depth and complexity before release. Cherie’s talent as a winemaker is more evident than ever, over the past 7 years her influence at Nyetimber has developed, to create our impressive award winning signature house style. We are delighted with the multiple awards at the IWC, which Nyetimber recognises as being one of the most prestigious and respected awards in the wine industry”