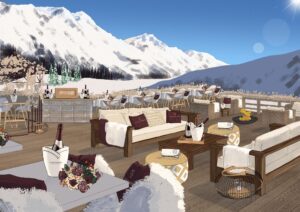 This January, The Nyetimber Winter Garden opened at CheCha Restaurant and Club, St Moritz, bringing the charming spirit of Nyetimber and a touch of English sparkle to The Alps.

CheCha Restaurant and Club is a renowned restaurant in St Moritz and is considered one of the most luxurious and sought-after Après-Ski venues in the Swiss Alps, located at a height of over 1,856m in the Upper Engadin.

Over the years, owner and chef Reto Mathis has built a truly notable establishment, which is now highly regarded for serving cutting edge and contemporary style Alpine cuisine. Reto Mathis has been established in St Moritz as a successful chef and caterer for more than 30 years. The top chef became particularly famous for his truffle and caviar creations and is also known for his national and international appearances.

Thoughtful details have been included in The Nyetimber Winter Garden terrace décor, which brings to life the Nyetimber brand – including beautiful florals, lavish cushions and blankets, as well as a branded bar where the full portfolio of Nyetimber wines is being served.

A season-long list of caviar appetizers is being expertly paired with Nyetimber Classic Cuvee Multi-Vintage, Rose Multi-Vintage and Blanc de Blancs, and is available for guests to enjoy in the outdoor Après-Ski terrace.

The Nyetimber Winter Garden at CheCha Restaurant and Club, St Moritz is open from 6th January – 12th April, from 11am to 11pm daily.